As an air force jet mechanic, Tom Burden encountered a problem he needed a solution for. He didn’t have a way to prevent his tools from falling off planes, which led to the creation of the Grypmat, a flexible, non-slip tool tray. How did this mechanic’s tool hold up in the tank? Let’s see in this Grypmat update.

As the owner of Virgin Airlines, guest shark, Richard Branson, was immediately interested in Grypmat but first needed to know more about the business finances.

Your Grypmat tool tray is the most flexible thing in your garage. It makes for super easy jobs when you just don't feel like breaking your back for the hundredth time this week. Less time cursing your 10mm means more time with your buddies. Place your tools anywhere with the Grypmat during any job. These flexible tool trays hold your expensive chrome-covered babies up to a 70-degree angle on virtually any stupid surface you find yourself working on. 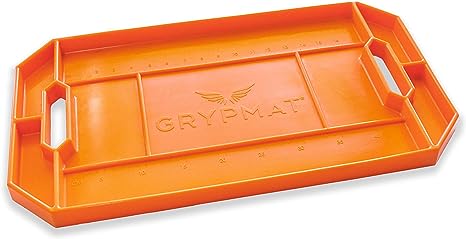 Tom has a specific reason for coming into the tank: he needs help getting into retail and marketing the product for automotive mechanics as well. He also is not very business minded and wants to keep making new products and have someone else focus on the business. In the future, he also wants to add apparatuses to be add-ons to the current product.

Daymond John saw the potential in many additional markets and offered $200,000 for 25% equity. He later changed his offer to $200,000 for 20%. Tom responded to this by saying he wants more sharks, although he knows this would require him to give up more equity.

Robert Herjavec and Richard offered $400,000 for 40%. Richard could sense Tom didn’t want to give up that much of the business and offered $200,000 for 15%, which Robert and Daymond also matched individually.

At the time of this Grypmat update, the company is still in business and its products can be found on the website and Amazon. Products can also be found in retail markets at Napa Auto Parts, as well as other stores that sell automotive products.

During our Grypmat update research we found that the company has sold over $1 million annually and is currently is worth around $4 million. While there are a few different variations of the product, there are not any product additions currently available like Tom was wanting to create.