11-year-old self-proclaimed skater and surfer, Carson Kropel, came into with a solution for school transportation. Carson and his friends would skateboard to school but then have nowhere to put their skateboards during the day. This problem inspired him to create Locker Board, a skateboard that fits in not only a school locker, but also a backpack. Let’s see if the sharks felt that this was an answer to a need or just a Season 9 gimmick in our Locker Board update and pitch recap.

The sharks jumped right in asking Carson what set his skateboard apart from the competitors. He explained that not only are his boards the only ones to fit in backpacks and lockers on the market but his boards were also recycled from skate company, Vans. 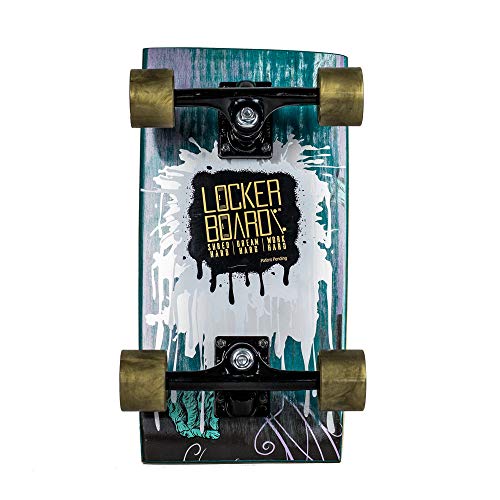 Lori Greiner said she was not going to invest in the product and dropped out. Daymond John suggested that Carson shouldn’t seek investors now because he will dilute his equity moving forward and also dropped out.

With two offers on the table, Robert Herjavec agreed with Daymond that Carson didn’t need investors right now. Robert then gave him an offer for a loan of $60,000 at a competitive interest rate.

Carson directly asked Richard how he would help the company. Richard said he would be able to help him on an international scale and would be able to push Carson. Carson took his offer without a second thought.

A quick Locker Board update: In 2022, Carson is now 16 and still the face of the company, along with Streettubez, a product for street surfing. He invented the latter and began selling it before his visit to . Shortly after his episode aired, he hired PS Stix for manufacturing to keep up with demand. In 2020, he licensed both of his products to Wham-O, a popular toy company.

To keep costs down and increase manufacturing speed, Locker Boards are no longer made out of recycled skateboards, but out of maple wood. Locker Board has grown 300% since appearing on .

You can purchase a Locker Board directly from the website, Big 5 Sporting Goods, Dick’s Sporting Goods, and two local California stores: Jack’s Surfboards in Huntington Beach and Dana Beach. We are glad to report good news for our Locker Board update and can’t wait to see what the future holds for Carson and his company!

You can find the other company updates from Season 9 Episode 1 here:

Don’t forget to take a look at our products page! We’ve got more company updates from Season 9.