If you’ve ever bemoaned the ability to wear your house slippers out of the house (whether it’s a quick trip or not), Muvez Footwear might have the solution for you. These entrepreneurs created house shoes with a removable sole, so you can slip into your outside footwear and back into your slippers without worrying about laces. Will the sharks slip right into this Season 11 deal? Read our Muvez Footwear update to find out!

Entrepreneurs Ryan Cruz, Eric Cruz, and Kevin Zamora are the minds behind Muvez Footwear. These slippers turn into outdoor shoes and vice versa using a removable sole that can be slipped on and off easily. They have a range of colors and options available, so you can look stylish and stop aggravating your friends that prefer no shoes on their carpets. 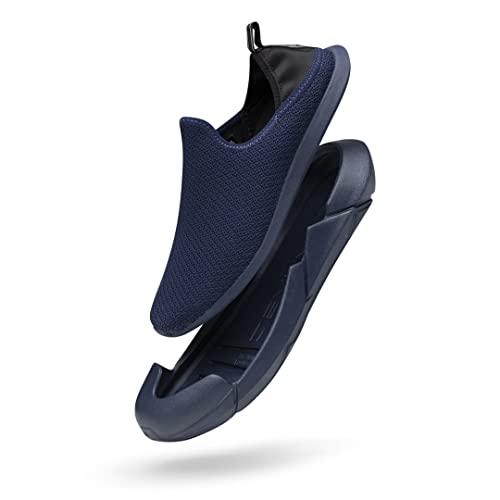 The team delivers a great pitch, showcasing how to use the Muvez. The soles are secure for running and even jumping once they are attached. They pass out Muvez samples to the sharks, who are eager to attempt using the shoes. All are suitably impressed by the design and function of the slipper-shoes.

Cruz tells the sharks that the company has done just over $80,000 in sales since April in the year of filming, but they haven’t spent any money at all on marketing. All of their sales are direct-to-consumer. They’ve had some issues with production, but overcame them by purchasing supplies themselves and creating the shoes in their garage in New Jersey.

The sharks question who these are marketed to. Mark Cuban doesn’t know who would use them, and Robert Herjavec is taken aback when the entrepreneurs state that they are targeting athletes in their marketing, as he doesn’t think that’s where they should be going.

Kevin O’Leary applauds the entrepreneurs, as Muvez is something new that hasn’t been seen before. However, he doesn’t think it’s been proven. He’s out because he thinks it’s too risky.

Similarly, Robert is turned off by the branding and says that the road ahead will be difficult for them without a lot of money. He drops out, and Mark quickly follows for the same reason.

Lori Greiner thinks the idea is brilliant, but she isn’t sure about investing. She might go in on a group deal, but she doesn’t want to go in on her own. The entrepreneurs turn to Daymond John, the last shark that may make them a deal.

Daymond wants to license the shoes, as that’s the only place he’d take it. He offers $200,000 for 33% of the company and refuses to go in with Lori. The entrepreneurs counter, asking Daymond to go down to 25% equity, and Daymond agrees. Will this be a great deal for Daymond? Keep reading our Muvez footwear update to find out.

Muvez footwear may still be having production problems, as they often sell out of sizes and colors. However, they are doing very well for themselves. The shoes have been featured in several online publications and have a ton of 5-star reviews on their website.

Annual sales numbers haven’t been released for the company. However, we found during our Muvez Footwear update research that they did $400,000 in sales following the airing of their episode. They’ve also been donating shoes and funds to essential workers and the World Health Organization during the pandemic.

You can find the other company updates from Season 11 Episode 18 here: