Baby booties and mittens get lost almost every time you put them on. Babies squirm, and soon enough the mittens get flung off, never to be seen again. Many of us have faced this problem and the entrepreneurs behind Goumi actually solved it. What will the sharks think of this company’s little bundle of a deal during Season 11? Read our Goumi update and pitch recap to find out.

Linsey Fuller and Lili Yeo met at a Chinese preschool over eight years ago. Both moms marveled at the fact that baby booties and mittens (to keep them from scratching themselves, as baby nails are quite sharp) never stayed on! Babies can wriggle out of them easily, leaving them with scratches on their faces, ankles, and legs. 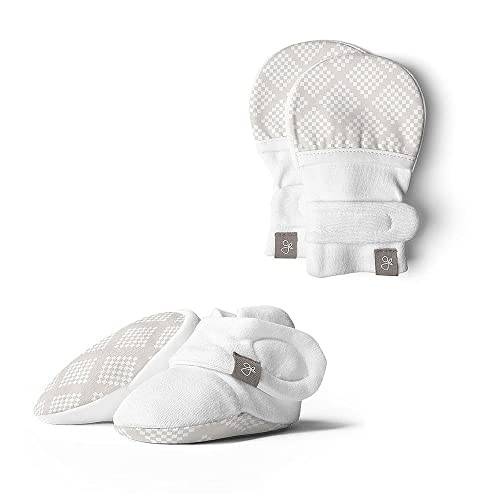 So they created Goumi’s flagship product, a baby mitten with a double closure mechanism that stays on through flailing and squirming. They have taken this design to booties as well, and released a sleeper that turns into a sleep sack with just a few snaps.

They sell mittens and booties individually at a high-profit margin. Mittens sell for $24 retail and the boots sell for $18 retail., but they also sell a starter ‘coming home’ bundle for $102. They are in a few boutique stores as well as direct-to-consumer on their website.

The sharks complement the packaging, saying that it’s smart and looks great. However, they get a little more cautious when Lili reveals that they’ve been in business for eight years and have done $5.2 million in lifetime sales, with only 15% of that being profit.

Their original ask of $1 million for 8% equity puts the company at a $12 million valuation. Kevin O’Leary, as well as Mark Cuban and Daymond John, take issue with this valuation, saying it’s a ‘bit rich’ for their taste. The entrepreneurs eventually reveal that the valuation is so high because that’s ‘what they can raise,’ which doesn’t sit very well with most of the sharks.

On the other hand, Lori Greiner thinks the products are too expensive. The starter kit is over $100, and parents will have to buy several additional pairs to have enough mittens and booties for their babies. She thinks that the price is a bit high in light of this, but Lili assures her that this was the perfect price point when they tested in online sales.

Mark has an issue with the packaging and presentation. It’s good packaging, but the store kiosks don’t really tell the story or introduce the product.

Barbara Corcoran compares Goumi to a company she invested in, Grace & Lace. They have done about three times the sales that Goumi has in the same amount of time. That’s because they do more than just baby products, so they spend less time trying to find new customers. It’s too much for her, so she’s out.

Lori is out next. It’s a quality product, but she doesn’t like the price. Daymond, on the other hand, makes an offer: $1 million for 30% equity.

It’s time for Kevin to step in. He invests in a lot of companies that could funnel into a baby business, so he’s interested. He offers $1 million as a revolving credit line with an interest rate of between 9 and 10%, plus 10% equity.

Instead of accepting right away, they counter Daymond’s offer and ask him to lower it to 15% equity, but he refuses. Even though they apparently have a line of credit they haven’t used, they accept Kevin’s deal. Was this a smart move? Keep reading our Goumi update to find out.

After the episode aired, online sales skyrocketed for Goumi. Sales held strong during the pandemic, and they are donating a percentage of sales to COVID-19 relief efforts. During our Goumi update research, we found out that they’re doing around $1 million in sales annually.

You can find the other company updates from Season 11 Episode 17 here: