Saucemoto came onto represented by three entrepreneurs, Tony Lahood, William Moujaes, and Michael Koury. They were hoping to secure a $45,000 investment for 15% equity in their company, Saucemoto, an in-car dip holder for sauces. Before we give you the Saucemoto update, let’s see if they were successful in earning a deal.

Saucemoto manufactures clips to hold dipping sauce inside traditional vehicles. The clip can simply attach to the air conditioning vent and hold a variety of fast food sauce containers, according to Tony. The convenient design of the product is relatable to most people that enjoy fast food. 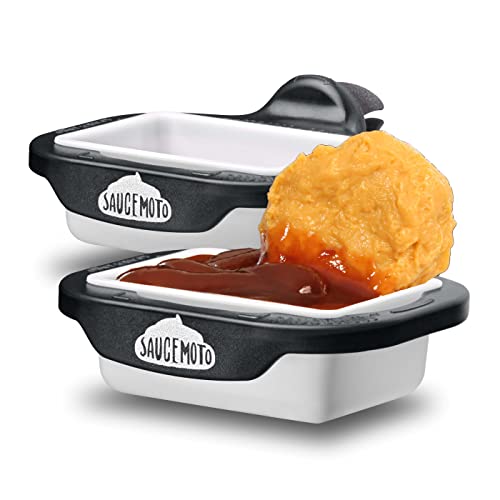 The sharks were certainly interested, but they wanted to learn more about the company’s financial numbers. The entrepreneurs told the sharks that they’ve sold more than 12,000 units, which totals about $75,000 in gross revenue. Most of the company’s sales come directly online on the official product website for Saucemoto. The product is sold for about $5.75, and it costs just over $.80 to manufacture a single unit.

Kevin O’Leary decided to offer $45,000 for 50% equity to start the bidding war between the sharks. After hearing Kevin’s offer, Mark Cuban and Barbara Corcoran quickly dropped out because they were simply not interested in making an investment. Robert Herjavec offered $45,000 for 40% equity, not so much because he believes in the product, but mainly because he believes in the three entrepreneurs.

After negotiating with Kevin, they managed to agree and accept an offer that ultimately includes a $45,000 investment for 25% equity. This deal would make Kevin an equal partner with each of the three entrepreneurs. Now it’s time to get a Saucemoto update to see how the company is doing today.

In our Sauncemoto update research, we found that Kevin never finalized the deal after the appearance. The company is still in operation and can be found online. It is estimated that the company continues to generate about $400,000 in sales per year. Not bad for a sauce holder!