Entrepreneurs Taylor Wiegele and Sierra Smith came onto Season 10 Episode 13 of seeking a $150,000 cash investment for their company, Zorpads, which specializes in eliminating shoe odors with simple one-size-fits-all inserts. Before we take a look at our Zorpads update, let’s see if the company received a deal from any of the sharks.

Asking for a $150,000 cash investment while only offering about 8% of the company is not something that generally rests well with the sharks. Taylor and Sierra were going to have to back up the company’s asking investment with impressive sales numbers in order to have any chance at securing a deal. Let’s see how negotiations went with the sharks as Taylor and Sierra began explaining more important details about their company, Zorpads.

Proudly made in the USA, NASA-tested technology, destroys odor, one-size fits all, sticks in place, ultra-thin, no mess and a low-residue adhesive. Each pack contains 10 Zorpads (one for each shoe 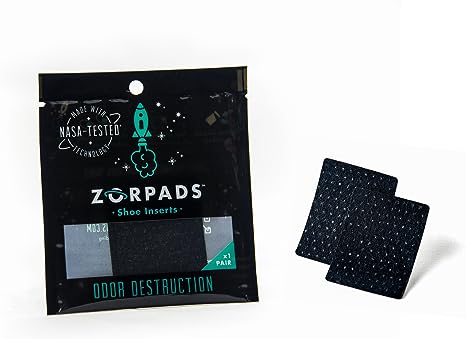 Taylor and Sierra explained that a single unit of odor-removing shoe inserts doesn’t have to immediately be replaced. In fact, they assured the sharks that they can be used for up to 60 days before a replacement was required. This was both good and bad news to the sharks, but they weren’t convinced about the product quite yet.

In just over a year of the company launching, Taylor and Sierra admitted their company had only recently earned $100,000 in gross revenue sales. The financial numbers for Zorpads didn’t seem to impress the sharks too much, but some of the sharks actually did seem interested in making an offer.

Mark Cuban was definitely not initially interested and he dropped out quickly from negotiations, leaving only four sharks to potentially make a deal for Zorpads. Lori Greiner teamed up with guest shark, Charles Barkley, to make a deal contingent on a QVC demo, but she would only offer them $150,000 if they received 30% equity in return.

Kevin O’Leary made a slightly more competitive offer of $150,000 for 20% equity. Robert Herjavec decided to ultimately copy Kevin’s offer and made an identical offer to Zorpads. After counteroffers between all of the sharks and the entrepreneurs, it turns out that Lori and Charles teamed up for a $150,000 investment for 22.5% equity.

Now let’s take a look at the Zorpads update to see whether the deal was ever finalized between the sharks and the entrepreneurs. It appears that Charles still has a role with the company and is serving as a partner of some kind.

The company is earning about $4 million in gross revenue sales per year and continues to be successful on Amazon’s marketplace. It seems like Taylor and Sierra have their company growing in the right direction, many years after their initial appearance on during Season 10.

You can find the other company updates from Season 10 Episode 13 here: