Eric Fagan and Chris Crawford appeared in Season 8 to seek an investment in their portable pressurized shower system, RinseKit. Chris and Eric’s efforts paid off, and they landed a deal with Daymond John. Since it’s been a while since the episode aired, it’s time for a RinseKit update.

RinseKit is a portable shower system that pressurizes spray for up to three minutes. It fills quickly and can be used in a pinch. Crawford explained that years of working in sandy and salty areas inspired RinseKit. 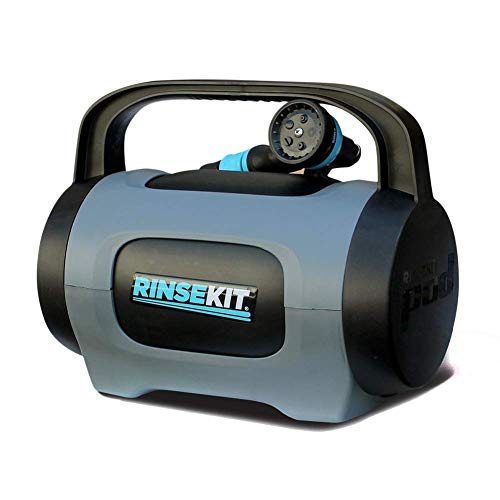 A successful Kickstarter campaign in the spring of 2016 allowed Chris to raise over $400,000 of funding (for 1,500 units ordered.) However, as revealed during their pitch, the company was already half a million dollars in debt. Naturally, the sharks couldn’t help but worry. They raised concerns about the low sales that that point, regardless of high projections for the years to come.

Despite all of these concerns, RinseKit was still able to attract a fair few offers. Mark Cuban didn’t make an offer, though he thought the product was brilliant. Robert Herjavec also liked the product and felt like it was creating a new market. To help, he offered $250,000 for 20%, which Kevin O’Leary found reasonable. He himself proposed a deal, albeit with $250,000 as debt in exchange for 5% equity.

Not long after, Lori Greiner jumped in with her own offer. She told them she would put in $250,000 as debt in exchange for 5% equity with a sale commission. Robert then tried to one-up Lori’s offer by increasing his investment to $350,000. The two ultimately ended up declining the debt offers, but just before they could negotiate with Robert, Daymond John swooped in to offer $250,000 as an investment for 7.5% equity with a sales commission.

Just like that, RinseKit found itself a suitable shark in Daymond. Let’s get to the RinseKit update.

Since appearing on and welcoming Daymond as an investor, RinseKit has done extremely well. The company has since expanded its product line to offer several other models and even a heated shower that plugs directly to your car’s cigarette port. Chris shared in a Starter Story post in 2020 that the company has since averaged over $1.5 million in sales every year since its inception.

Curious about the other products in Season 8 Episode 15? Find their company updates here:

For more information about the companies featured in Season 8, check out our Season 8 product page.