Richard Elden came to Season 8 to pitch an investment in his portable carts. This product was already successful, with 15 years in the business and $8 million projected sales that year, so it’s no surprise that he was able to land a deal with two sharks. Did his success continue after appearing on the show? Our dBest Products update will explain it all.

Richard’s amazingly innovative carts seemed to have solved every problem with standard carts. He has a complete line of different carts, luggage, dollies, and more. He’d been in business for 15 years and used to be featured on QVC.

When he appeared on , he was already in a ton of retail stores and was projected to make up to $8 million in the year of filming. The sharks were just as impressed by those numbers as they were by the product. 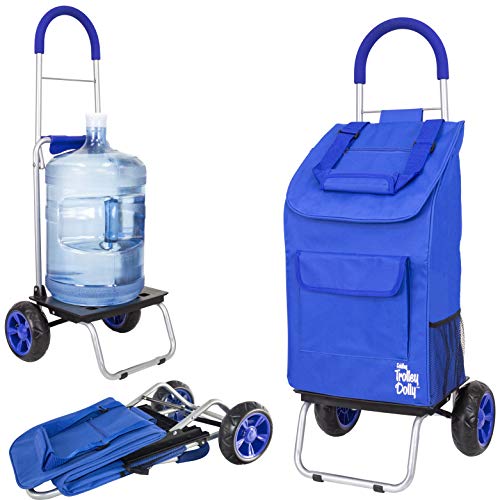 The only problem was that Richard was having problems keeping up with inventory. He was selling out often and not able to fund new orders.

With all the facts on the table, Daymond John was the first shark to make an offer. He offered Richard $350,000 for 15% equity, plus a guarantee to fund and fill all future orders. This was understandably an appealing deal for Richard.

Kevin O’Leary also made him an offer: $350,000 as a line of credit at 18% interest and 5% equity. With two offers on the table, Robert Hervajec bowed out, stating he couldn’t follow the company’s business model.

However, this only made Lori Greiner more interested in making a deal. She offered Richard $350,000 for 15% equity. Before she could finish, Mark Cuban interrupted and said she was underselling herself. He wanted to go into a deal together. They offered $350,000 for 20% equity plus a $2 million line of credit at 15% interest. Richard would get two sharks in this deal.

Richard debated a bit, unsure which deal was best. He waited long enough that Daymond dropped his offer.

He tried to counter Lori and Mark at $700,000 for 15% equity plus a line of credit to fund orders. They refused, and Richard then declined Kevin’s offer and accepted Mark and Lori’s original deal. Is the company still successful? Find out in our dBest Products update.

Unfortunately for dBest, it doesn’t look like the deal with Mark and Lori closed. Instead, Richard continued to do what he was good at. Our dBest Products update revealed that you can find his carts at Bed Bath and Beyond, Target, Walmart, Amazon, Staples, and more. Annually, dBest Products does upwards of $8 million in sales. Good for him!

Catch up with other company updates from Season 8 Episode 15 below:

Before you go, take a look at the other company updates from Season 8 on our Season 8 products page.