Tyson and Miles Walters came to Season 10 to pitch their product to the sharks in hopes of receiving $250,000 for 10% of their business. This investment would value the company at $2.5 million! Do the sharks think this jacket for dogs is worth it? Find out in our pitch recap and Shed Defender update.

The sharks could not believe the sales numbers that Tyson and Miles mentioned when asked. After only selling the product for a little over 17 months, they told the sharks that they had $1,200,000 in sales, which comes out to about 25,000 units of their product. The sales came from their own website and Amazon, although Tyson and Miles told the sharks that they were planning on starting the process of wholesaling too. 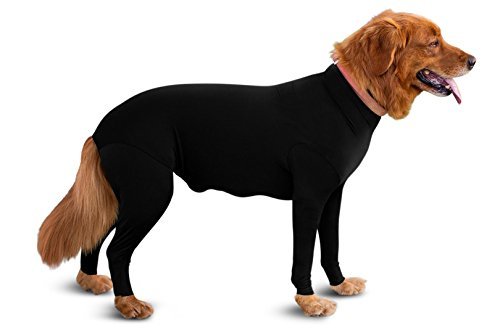 The sharks were impressed with their sales numbers and their margins, especially when they declared that they had nearly 80% margins in place for all nine variations and sizes of their dog onesie that prevents shedding.

As negotiations started, Mark Cuban expressed how impressed he was with Miles and Tyson, but ultimately declared that he didn’t think he could benefit them by making them an offer. He decided to drop out and let the other sharks consider making their own offers. Barbara Corcoran agreed with Mark and decided to drop out because she didn’t believe that it was her type of investment.

Kevin O’Leary decided to make an initial offer of $250,000 for a third of the company. Robert Herjavec offered an identical deal to the duo on the stage, copying the initial offer that Kevin had just made. Lori Greiner was the last shark still in on the negotiations and she quickly undercut the offers of Kevin and Robert by offering to do the same deal except for just 28% equity in exchange for a $250,000 investment.

After a quick counteroffer back to Lori, they ultimately agreed to do $250,000 for 25% equity, allowing Miles and Tyson to strike a deal with Lori.

Now let’s dive into our Shed Defender update. Unfortunately, the deal was never finalized with Lori. Miles and Tyson continued operating their business and have managed to raise their company’s annual revenue to just over a million dollars, while also expanding the product’s presence to retail stores like Bed Bath & Beyond, as well as Walmart.

Things are looking promising for our next Shed Defender update, despite the deal falling through.

You can find the other company updates from Season 10 Episode 2 here:

Don’t forget to take a look at our Season 10 products page! We’ve got more company updates from Season 11.