Jason Burns from Calabasas, CA is the self-proclaimed Fidgetman. He is a grown man with ADD, which makes it hard for him to concentrate and stay still. Because he has had issues with his fidgeting in public, he has created a line of products that allow users to fidget with them discreetly. Will the sharks relate to the Fidgetman and see a need for this product during the Season 9 pitch? Let’s see in this Fidgetland update and pitch recap.

Jason Burns has created eight different fidget toys. After being diagnosed with ADD and told he would not be able to attend college, he made it but just couldn’t stop bouncing his knee. Upon arriving in the he had sold over 50,000 products. 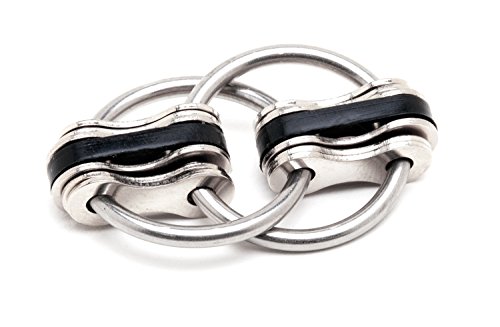 The sharks were very impressed with his sales. Mark Cuban felt he could not help get this product into the market, so he dropped out. Lori Greiner did not like the fidget toy and dropped out. Mr. Wonderful, Kevin O’Leary, followed suit.

Barbara Corcoran identified with this product, as she had a child with ADD. She even went so far as to say that all but one person she’s invested in on the has some sort of learning disability. She offered $50,000 for a 20% stake in the company.

Robert Herjavec also identified with Jason’s story and loved using the fidget. He offered $50,000 for 15% equity. Jason countered Barbara with $50,000 for 20%, but she declined. Jason then accepted her original offer.

At the time of our Fidgetland update, it looks like Jason’s deal with Barbara was a great decision. The month after their episode aired they sold 20,000 products and have grown from three employees to 25. Fidgetland wants to continue to make new products to help those that need something to fidget with.

Currently, there are fourteen different styles of fidgets available on their website ranging in price from $8-$19. You can also purchase a DIY fidget kit, where you can make your own toys. Along with the toys, they now offer clothing and even fidget jewelry. There are several positive reviews in the testimonials, including a woman who just got her first fidget toy at age 71!