The first company featured in Season 10 Episode 21 was Basepaws. Founder Anna Skaya entered the tank and introduced her company, which specializes in DNA testing for cats. She came in seeking an investment of $250,000 in exchange for just 5% equity in her company. Let’s see if any of the sharks were interested in making a deal before we get a Basepaws update.

The way that the Basepaws operates is that customers receive a kit in the mail that easily allows people to receive a DNA sample from their cat. Once the sample is received by Basepaws and sent into the lab, a detailed report is printed and sent to the customer. The report includes details about the cat’s history and ancestry.

The Basepaws Breed + Health Cat DNA Test gives you answers specific to your cat’s breed composition, traits, and health. Learning more about their unique needs, personality, genetic predispositions, and dental health can help you make proactive choices that support your cat’s health so they live a longer, happier life. Most advanced and comprehensive cat DNA test on the market. As seen on Shark Tank and Ellen’s List. 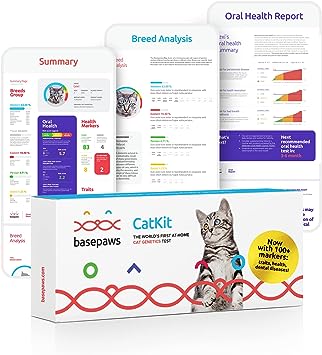 Anna told the sharks that she could be interested in shifting the company down additional pathways that could open up DNA testing for dogs, horses, and other common household pets, which could be one of the primary uses for the cash investment that she is seeking.

Kevin O’Leary wanted to hear about the margins for a single DNA test for cats. Anna quickly replied and told Kevin that the unit costs $25 for her to make and that her company sells it for just under $100.  The product had been available for just over ten months at the time of the pitch, generating more than $200,000 in gross revenue and establishing a revenue target of about $400,000.

Kevin was the first shark to make an offer to Basepaws. He offered $250,000 for 8.3% equity and wanted an additional 1.7% in advisory shares. Meanwhile, Lori Greiner decided to drop out because she thought that the company hadn’t generated enough sales to justify an investment. Daymond John and Mark Cuban also dropped out for similar reasons.  Robert Herjavec didn’t drop out, but he decided to copy Kevin’s offer and make an identical offer to Anna and her company.

With two identical offers on the table, Anna did everything in her power to have them team up. The good news is that Kevin and Robert agreed to split the deal and Anna quickly accepted their offer. It’s now time to get our Basepaws update to see how this innovative DNA testing company for cats has performed since appearing on and earning a deal.

The company has continued to partially update its DNA testing kits and has even come out with varied testing for cats. After , Basepaws is still operating and continues to generate more than $1 million per year in revenue. The company’s official website is also updated regularly with information relating to its testing kits and products. The future looks bright for our next Basepaws update.

You can find the other company updates from Season 10 Episode 21 here: