After explaining their tragic story of losing their own dog to a coyote attack, Paul and Pamela Mott came onto to seek an investment for their company and product, Coyote Vest. This specialized product is developed to protect dogs from an attacking animal, such a coyote. Before we get a Coyote Vest update, let’s see if any of the sharks were interested in partnering and making a deal.

Paul and Pamela proudly told the sharks that their company has over $500,000 in lifetime sales. At the time of the pitch on , they had managed to generate $250,000 in annual gross revenue sales to date. In addition, all of the product sales come directly from the company’s website.

Like a CoyoteVest, the purpose of the SpikeVest is to help slow down or prevent a surprise attack and give you enough time to react before serious injury occurs. The main difference is the SpikeVest uses two wide belts with Velcro while the CoyoteVest uses nylon straps with snap buckles. 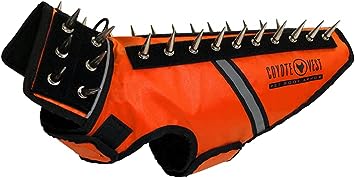 Kevin O’Leary wanted to hear about the product margins. Paul told the sharks that the Coyote Vest kit can be purchased on their official website for $120, while it only costs about $30 to manufacture a single unit.

Sadly for Paul and Pamela, none of the sharks made a financial offer, so they were forced to leave without a deal for their company. Let’s get a Coyote Vest update to see if the company is still in business and to see whether they’ve managed to grow and improve their revenue numbers.

It turns out that Coyote Vest has been steadily growing and manages to generate about $1 million per year in revenue. Not much has changed in the way that they sell the product since most of their sales still come directly through their official website.

This seems like a nice business for Paul and Pamela and hopefully we will get some more news in our next Coyote Vest update.

You can find the other company updates from Season 10 Episode 23 here: