After failing to secure a deal on a previous season of for a different company, Tate Koenig came back during Season 14 to try and earn a deal for his new product known as the Pizza Pack. Tate was looking to sell 10% equity in exchange for $100,000 dollars from the sharks. Let’s see if the second time is the right time for Tate, and get a Pizza Pack update.

Tate Koenig started by telling the sharks about his company’s margins. A single unit costs about $4 and is sold at a price point of $24.99. Some of the sharks thought that the price point was a little expensive, but they were happy with the margins.

Each pizza container collapses and expands to accommodate the number of pizza slices you have. Perfect for storing leftover pizza without a pizza box taking up the whole shelf! 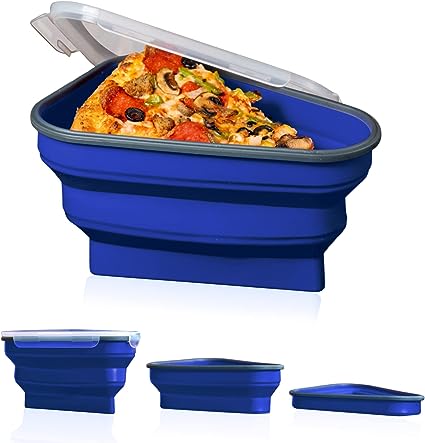 With more than $250,000 dollars in revenue since launching in April, almost all of the company’s sales come from online e-commerce sites like Amazon. The average customer acquisition cost is just under $3 dollars.

Lori Greiner wanted to know what Tate would spend the money on. Tate responded by suggesting that it would be used for inventory.

Kevin O’Leary made an offer of $100,000 dollars in exchange for 10% equity and he wanted a royalty of $1 dollars per unit until his investment is returned. Then the royalty would drop to 50 cents in perpetuity.

Lori Greiner decided to make an offer of $100,000 dollars for 15% equity. Mark Cuban wanted to buy the entire company, so he gave Tate Koenig a few moments to consider how much he would accept to sell the entire company. He told Mark Cuban that he wanted $5 million. Mark countered back at $1.5 million, but Tate wasn’t interested.

Barbara Corcoran dropped out without making an offer to Pizza Pack. Robert Herjavec also felt the same way and decided to drop out.

After thinking things through, Tate managed to secure a deal with Lori Greiner for 13% equity in exchange for $100,000 dollars.

We don’t have much news on a Pizza Pack update right now, but the future is bright for Tate and Lori as they look to bring the company to new levels. Tate sacrificed the possibility of selling his business for $1.5 million dollars to Mark Cuban by making a deal with Lori, so hopefully, it was worth it.

We will have to wait to find out until our next Pizza Pack update! For now, you can buy your own on the company’s website or on Amazon.

Before you go, be sure to check out updates from the other companies featured in Season 14 Episode 1.

Don’t forget to check out our Season 14 products page too!