We’ve all dealt with annoying, itchy bug bites. Where most see an inconvenience, Kelley Higney found a solution. Bug Bite Thing is a one-of-a-kind product that helps to reduce the immediate allergic reaction that most of us have to bug bites. Will the sharks take a bite of this already successful product during the Season 11 pitch? What happened after ? Find out in our Bug Bite Thing update.

Bug Bite Thing is a solution that we’ve all wished for at some point. This simple device sucks the insect saliva out of a bite or sting, which immediately reduces swelling, itching, and discomfort. 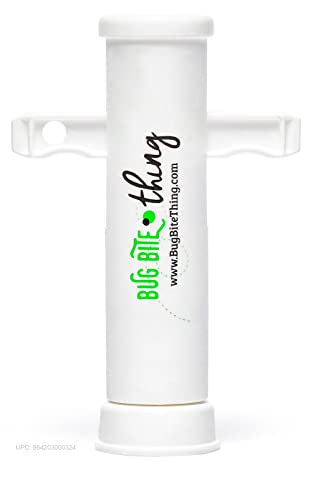 Kelley Higney and Ellen McAlister started their playful pitch with an effective message: bugs give no quarter, but Bug Bite Thing can help. This mom and daughter duo sold the product well. Higney recently moved her family from California to South Florida. However, she was not prepared for the mosquito issues.

When discussing this with an international customer, she learned that a tool to help was already in production. She tracked down the distributor and started packaging them to sell in the US. The company grossed $500,000 in sales in its first year.

They demonstrated how the device works, showed before and after pictures, and the sharks were impressed. The debate started immediately. All five sharks were competing for the opportunity to invest in this product. Rohan Oza offered a deal based on exactly what they asked for. Barbara Corcoran offered them $200,000 for 10% equity, which was actually more than they asked for.

Even Kevin O’Leary wanted in. He offered $150,000 for 6% equity plus a royalty fee of $1 per unit. While the sharks debated, Lori was waiting with her signature big offer: The Golden Ticket.

Lori Greiner’s Golden Ticket was a promise of exactly what the entrepreneurs are asking for, and the assurance that she believed in them. While Barbara and Rohan tried to team up, Higney and McAlister choose Lori’s Golden Ticket offer. Was this the right choice for them? We’ll find out in our Bug Bite Thing update.

We would usually ask where the company is now in our Bug Bite Thing update. With this product, a better question would be: where ISN’T it? Bug Bite Thing is in most major retailers, including Target, CVS, Amazon, and a host of other big-box retailers.

It’s no surprise that Bug Bite Thing has become a powerhouse, especially considering that the company was successful before its appearance on . Lori’s retail connections made a deal with her the best option for Bug Bite Thing. In 2021, the company projected more than $15 million in sales and will likely only do more in the years to come.

Meanwhile, check out our other company updates from Season 11 on our Season 11 products page.