Cooking at home is great, but it can be messy. Alexander Eburne’s Prepdeck organization system helps cut down on the mess and keeps all of your tools where you can find them. This organization kit has places for ingredients, an integrated cutting board, and dozens of snap-on tools. After pitching the company on Season 13, how will the sharks react to this all-in-one cooking organizer? Find out in our Prepdeck update and recap.

When Alexander Eburne appeared on , Prepdeck already had a few million dollars in sales. By the end of the filming year, he projected $10 million in sales. The sharks stayed quiet about the product but were enthusiastic about Alexander’s sales. 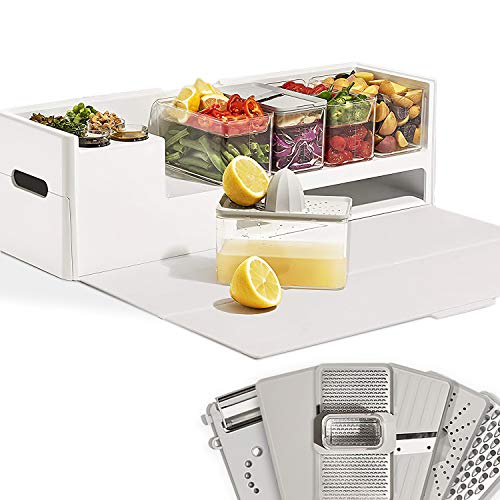 When they asked how he planned to use the money, Alexander gave a neat, business-savvy answer that the sharks loved. However, Barbara Corcoran was the first to go out regardless. She didn’t like the plastic design or containers. Kevin O’Leary, on the other hand, offered a $750,000 loan with 9.5% interest over 36 months for a 5% equity stake. He promised to brand the company with a Chef Wonderful endorsement.

This left Kevin and his offer. Alexander countered for 9% interest and interest-only payments. He also tried to decrease the equity ask to 3%. Kevin wasn’t interested in taking it. They haggled a bit but ultimately couldn’t reach an agreement. Prepdeck walked away without a deal. Where are they now? Find out in our Prepdeck update.

Since appearing on , Prepdeck has released a few more products. The company now offers a soup cube device, cooking utensils, and non-stick cooking sheet organizers. While our Prepdeck update didn’t reveal any new numbers, we’re sure this company is going places!

Curious about the other company updates from Season 13 Episode 16? Find them here.

Before you go, don’t forget to check out our Season 13 products page for more company updates from Season 13.